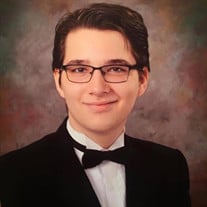 “Trey” Terry Glenn Phillips, III, was born in Birmingham, Alabama on September 10, 1999 to Terry Glenn Phillips, Jr. and Collette Phillips at St. Vincent’s Hospital. Trey passed away due to a sudden, unforeseen illness, October 5, 2020 at St. Francis Hospital in Evanston, Illinois. Trey was preceded in death by his Pawpaw Carl Robertson and Grandmother EuraLee Robertson. He is survived by his loving parents Glenn & Collette Phillips, his protective and adoring brother Marcus, protective and adoring sister CarLee, loving grandparents Shirley & Terry Phillips, Sr., Mearlene Topes, and A.T. Vines. His surviving Aunts & Uncles include; Uncle Tim Robertson,Aunt Avis & Uncle Gary DePoyster, Aunt Kim & Uncle Bill Jeffrey, Aunt Melanie & Uncle Steve Clay, Aunt Shannon & Uncle Howard Allen, Uncle Alex Robertson, Aunt Shannon Grove, Aunt Candy Flud-Gilman, Aunt Chantelle & Uncle Josh Morgan, & Aunt Cassidy Vines. He is also survived by a host of loving cousins, and dear, precious friends & family. Trey was a 2018 honor graduate of Corner High School in Corner, Alabama. He loved theatre and was involved in theatre at Corner H.S., where he excelled from his freshman year, through high school graduation as a CTA alumnus.After graduation Trey continued to pursue an acting career. He was with Goleman Casting here in Alabama. While with Goleman Casting, Ron Goleman kept him busy with work here. He was able to work as an extra on 2 separate movies filmed in Alabama. Trey had just signed up with John Casablancas in Chicago, Illinois just prior to his promotion with CVS. Trey found a certain satisfaction, as well, with his work at CVS Pharmacy in Warrior, Alabama, and even more so upon transferring to a CVS very near Chicago’s Magnificent Mile, where he was hitting all his marks, and achieving his goals of job promotion. He was recently promoted to Shift Supervisor at the Chicago store. His boss bragged on his work ethic. Trey had recommitted his life to Jesus a few months prior to moving to ‘The Windy City.’Trey was the guy who would lend a hand, a shoulder, and an ear. He was the guy who always had a smart-alec, or funny quip.As a child, through his adulthood, he was quick to give a hug, or draw close. As a child, he was our little snuggle bunny. As the young man that he became, he was a warm heart with open arms. As his parents and siblings have always said, since he was a baby, “He’s the best of all of us.” Truly, he really was the best of all of us. He loved his family and friends and will be sorely missed until we all meet again. Services will be held at New Horizon Funeral Home. Visitation Sunday, October 11, 2020 from 6-8pm. Funeral Service, Monday, October 12, 2020 beginning at 2pm with burial following at Phillips Chapel Cemetery. Online condolences can be made at www.newhorizonmemorial.com . New Horizon Memorial Funeral Home directing.

The family of "Trey" Terry Glenn Phillips III created this Life Tributes page to make it easy to share your memories.

Send flowers to the Phillips family.