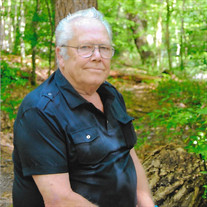 T J Lockhart, 71 of Blountsville, passed away Sunday August 18, 2019 at his residence. TJ Lockhart was saved and baptized in 2006 at Southside Baptist Church by Brother Perry Knight in Cullman Alabama. Since then he and his wife Janette Glover Lockhart of 28 years have attended church as often as possible. In times of sickness, when they were no longer able physically attend church, they made it a point to watch Sunday service on TV. On Sunday August 18th, while surrounded by his loving family and listening to Sunday sermon conclude in prayer, he passed on to his forever home. There was never a dull moment with TJ, he loved to travel and lived life on his own terms. He enjoyed time with his family and looked forward to family reunion every year, when he would have the chance to catch up with his brothers and sisters, as well as a large portion of the extended family. He loved the outdoors and looked forward to fishing trips of any kind. He made friends easily and never met a stranger. He often told stories about growing up in Empire Alabama and all the mischief he, his siblings, and best friends – Wade and Randy- got into. TJ always wanted to make sure everyone around him was taken care of, even if he had only met them moments earlier. If you ever came over for a visit you were guaranteed to leave with something-fresh eggs, vegetables, or even the occasional extra lawnmower. TJ loved his family and friends unconditionally and worked his entire life to make certain they were cared for. He was a devoted husband, father, grandpa, brother and friend. His long-time friend and Pastor Perry Knight will be officiating his funeral services on Tuesday August 20th at 1 P.M.at New Horizon Memorial in Dora Alabama. He will deeply be missed by both family and friends- as there is no replacement for such an amazing, kindhearted and loving man. Funeral services will be Tuesday August 20, 2019 at 1:00 pm in the New Horizon Memorial Chapel. Rev. Perry Knight will officiate. Burial will follow in New Horizon Memorial Gardens. Visitation is Tuesday from 12-1 pm in the chapel. He was preceded in death by his parents Herbert Roosevelt Lockhart and Essie Mae Campbell Lockhart; sisters, Mary Louise Niblett and husband J. C., Margaret Marie Gann and husband Raburn, and Billie Ruth Holley and husband Carroll; and brother, Charles Edward Lockhart. Survivors include his wife Janette Lockhart of Blountsville; children, Kathy Allen of Fort Thomas, KY, Terry Lockhart (Melissa) of Cuba, MO, Tina Yahn (Carl) of Falkville, Joyce Ann Worley of Cuba, MO, Lawanda Haynes (Jeremy) of Hanceville and Mindy Wilkins of Joppa; 21 grandchildren and 19 great grandchildren; brothers, James Henry Lockhart (Louise) and Jerry Wayne Lockhart (Stella); many other relatives and friends. New Horizon Memorial Funeral Home, Dora directing 205-648-2323

T J Lockhart, 71 of Blountsville, passed away Sunday August 18, 2019 at his residence. TJ Lockhart was saved and baptized in 2006 at Southside Baptist Church by Brother Perry Knight in Cullman Alabama. Since then he and his wife Janette Glover... View Obituary & Service Information

The family of T J Lockhart created this Life Tributes page to make it easy to share your memories.

Send flowers to the Lockhart family.