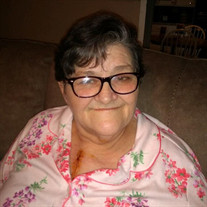 Sandra Kay Peoples Madison, age 60, of Graysville, Alabama, born February 27, 1959, left this Life on earth to Go Home on January 9, 2020. She resided in Oneonta Alabama. Sandra (NANO) was a beautiful soul who left memories on everyone she came... View Obituary & Service Information

The family of Sandra Kay Peoples Madison created this Life Tributes page to make it easy to share your memories.