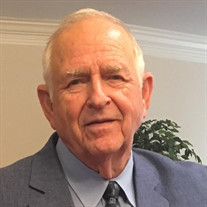 Reverend Gene Smith of Burnwell, Alabama went home to be with his Lord and Savior on December 19, 2019. He was born Clifton Eugene Smith in Chattanooga, Tennessee on September 12, 1945 to a loving family. They moved to Burnwell, Alabama when he was seven years old. Gene spent his life serving God, his church and his community. While serving in the Alabama National Guard, his professional career began in construction with Brasfield and Gorrie in Birmingham, and he later founded and owned a heating and air conditioning company. He also spent many years as an insurance agent. While a young man he began singing with the Psalmsters, a Southern Gospel quartet that included Melva Nix who would become his wife and ministry partner for 42 years. His ministry included not only singing, but also several years of travel as an evangelist, and he pastored churches in Georgia and Alabama. From 1985 until his death he served as pastor at Burnwell Bible Church of God. He was a gifted minister, preacher, singer and songwriter. Rev. Smith was preceded in death by his wife Melva Nix Smith, daughter Andrea Lynn Smith, parents Dora and Joe Smith and brother Joseph Lee Smith. He is survived by his devoted wife Norma McMickin Smith, loving daughter Melia Smith D’Amico and her husband Joe, grandchildren Cruz and Faith Ann D’Amico, sisters Ova Jane Gilbert and Juanita Fay Snow, brother Arthur Smith and many extended family, nieces, nephews, and cousins. He leaves behind a family and community that he loved deeply and that will miss him profoundly. To honor and celebrate the extraordinary life and ministry of Rev. Smith, a Homegoing Service will be held on Sunday, December 22 at Burnwell Bible Church of God. Visitation will begin at Noon with the Homegoing Service beginning at 2:00. The Rev. Ray Jackson will officiate. Interment will immediately follow at the adjacent cemetery. A reception in the church dining hall will follow the services. In lieu of flowers, Rev. Smith has requested memorial contributions be made to Burnwell Bible Church of God, where he served as pastor for 34 years.

Reverend Gene Smith of Burnwell, Alabama went home to be with his Lord and Savior on December 19, 2019. He was born Clifton Eugene Smith in Chattanooga, Tennessee on September 12, 1945 to a loving family. They moved to Burnwell, Alabama when... View Obituary & Service Information

The family of Rev. Gene Smith created this Life Tributes page to make it easy to share your memories.

Reverend Gene Smith of Burnwell, Alabama went home to be with...

Send flowers to the Smith family.