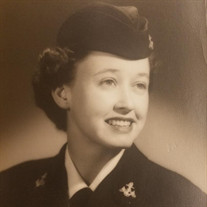 Marguerite Mason Wallace was born in Parrish Alabama, November 9th 1925. She went to be with her Lord and Savior on November 14th 2018. She passed peacefully at home and had just celebrated her 93rd birthday surrounded by family and friends. Funeral service will be Saturday, November 17, 2018 at 2:30 pm. Burial will follow at McCormack Cemetery. Visitation will be Saturday 12:30pm until service time at 2:30 pm. Marguerite had loving parents and 3 brothers that she was very proud of. She attended many of the local schools as her father was a coal miner and they moved from one camp to another as was necessary. She started school and graduated from Dora High School. She went to work at the Jefferson County Health Department as a Clerk Typist from November 1947 until May 1949. She traveled to Atlanta Georgia and enlisted in the Women Accepted Volunteer Emergency Service, WAVES, a component of The United States Navy on June 8th 1949 and served as a Dentist's Assistant until April 7th 1953 earning a Good Conduct Medal and a recommendation for reenlistment. She had many wonderful stories to tell of time spent in Washington DC, Corpus Christi Texas and San Diego California. She married Oscar Gene Wallace, whom she had known before the war, on September 11th 1954 in Lowndes County Mississippi and settled into home life on Bankhead Hwy, Dora. Marguerite retired from Civil Service at the Veteran's Administration Hospital in Birmingham in 1986. Marguerite is predeceased by her parents Louie Thomas Mason and Christine Lawson Mason, husband Oscar Gene Wallace, her brothers Louie Thomas Mason, Jr. , Larry Mason and Julian Dale Mason. She is survived by her two loving sons, Paul Gene (Sherrie) Wallace and Gary (JoAnn) Wallace, four grandsons, Bradley Wallace, Brett (Gwyn) Wallace, Justin Wallace, Trenton Wallace, three great granddaughters, one great grandson, one sister in law and several nieces and nephews. She was so very pleased and thankful for her precious nurse Windy Truitt.

Marguerite Mason Wallace was born in Parrish Alabama, November 9th 1925. She went to be with her Lord and Savior on November 14th 2018. She passed peacefully at home and had just celebrated her 93rd birthday surrounded by family and friends. Funeral... View Obituary & Service Information

The family of Marguerite Wallace created this Life Tributes page to make it easy to share your memories.

Send flowers to the Wallace family.