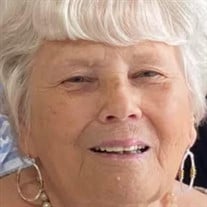 This is the story of Laura Marie Garnett. Laura’s story began July 27, 1939 as Laura Marie McCrary. Laura was an only child to William J. and Myrtle A. McCrary. She lost an older brother and an older sister when they were infants. Laura was left to be extremely spoiled as an only child by a wonderful Christian daddy and mother. But what was given in abundance was the knowledge of the gospel. Her father was the greatest influence of her spiritual life. She grew in church and developed a love of music, becoming a very talented pianist. After being double promoted in elementary school, Laura went away to Wayland Baptist College in Plainview, TX at the age of 16. This is where she met the love of her life, Chester J (Cy). They were married December 26, 1960. Two daughters arrived a few years later, and then a son. Laura and her family moved to and from many military bases across the United States and even to Ludwigsburg, Germany. Laura continued her education and obtained and MBA in elementary education. She began a teaching career that spanned 35 years and eventually retired from Corner Elementary School in Warrior, Alabama where the family eventually settled. She became a single mother of three small children while her husband fought in combat in Vietnam. During his tour of duty, Laura perfected the red felt tip pen as she graded paper after paper of penmanship and correcting grammatical errors. The loss of cursive writing has been mourned by her for years! Laura was known for rescuing animals and beautiful human souls that needed a mother’s love. Laura cared for her parent’s until their death. She spent the first years of retirement traveling to China with ELIC where she educated Chinese students in conversational English. This is where her love of missions flourished. Mt. Zion Baptist Church is where she called home and where she remained active until her death. She is preceded in death by her father William J. McCrary, her mother Myrtle A. McCrary, her sister Mary Elizabeth McCrary, brother William J. McCrary, Jr, her son, William B. Garnett. She is survived by her husband of 60 years, Chester John Garnett; Daughter D’Lesa Lyn Yates (Doug), Michele Weathers (Michael), ‘adopted’ son Mitch Blackmon, and ‘adopted’ daughter Carolyn Williams; grandchildren: Colby Carroll (Jessa); Brantley Wilson; Braddock Wilson (Cortani); Brooke Joseph (Austin); Parker Stone Weathers and Liam Jasper Arrington. Great Grandchildren: Judith Blaike Wilson, Jameson Braddock Wilson, Brielle Hartley Carroll. Services will be held at New Horizon Memorial Gardens for immediate family only due to the Covid 19 pandemic. In lieu of flowers, the family asks that you nurture Laura’s love of missions by donating to: Campus Outreach Birmingham Justin Hawarah P.O. Box 43737 Birmingham, AL 35243 United States cobirmingham.org A special memorial is being formed in her memory for her devotion to missions. Pall bearers: Michael Weathers, Doug Yates, Braddock Wilson, Colby Carroll, Mitch Blackmon, Stone Weathers, Austin Joseph.

This is the story of Laura Marie Garnett. Laura&#8217;s story began July 27, 1939 as Laura Marie McCrary. Laura was an only child to William J. and Myrtle A. McCrary. She lost an older brother and an older sister when they were infants. Laura... View Obituary & Service Information

The family of Laura Marie McCrary Garnett created this Life Tributes page to make it easy to share your memories.

This is the story of Laura Marie Garnett. Laura’s story began...

Send flowers to the Garnett family.