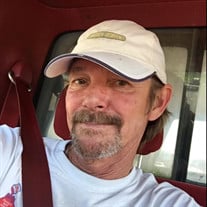 Kenneth Michael “Kenny” Peeples, age 64 of Bagley, passed away Tuesday March 16, 2021. Kenny was owner and operator of Metro Painting, and was also technically trained as a machinist. He worked in the machinist role at Stockham Valve as well as other shops for several years before transitioning his career to his own residential painting business. His skill with a paint brush and roller was unmatched. Kenny loved classic rock music, even working as a roadie with a couple of local Birmingham bands (Tower and Circus) during the late 70’s, which may have been where he acquired his excellent skill as an air guitar player. He loved his dogs, and lived out that “man’s best friend” companionship with his dogs, who could often be found right by his side. Most of all, Kenny loved his friends and was willing to help where there was a need. Kenny was preceded in death by his father, Ken Maynard Peeples, and is survived by a son, Christopher Michael, mother Ova Peeples, brothers Alan (Cindy) and Jeff, nieces, a nephew and great nieces and great nephews. Funeral services will be held at New Horizon Memorial Funeral Home on March 20, 2021 at 11am. The family will receive guests from 9-11am. Interment will follow at Crestview Memorial Gardens in Adamsville, Alabama. In lieu of flowers, the family requests that donations be made in the memory of Kenny Peeples to the Fraternal Order Of Eagles 972 Aerie, 145 Persimmon St., Birmingham, AL 35214 . The family says Kenny wasn’t a fan of suits and ties, so come dressed comfortable.

Kenneth Michael &#8220;Kenny&#8221; Peeples, age 64 of Bagley, passed away Tuesday March 16, 2021. Kenny was owner and operator of Metro Painting, and was also technically trained as a machinist. He worked in the machinist role at Stockham Valve... View Obituary & Service Information

The family of Kenny Peeples created this Life Tributes page to make it easy to share your memories.

Send flowers to the Peeples family.