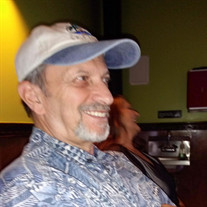 Kenneth “Kenny” Earl Moore, Sr. passed away September 3, 2019. He was born and raised in Elkhart, IN where he graduated from Jimtown High School. Upon graduation he moved to Alabama where he worked for ACIPCO between his service in the Marine Corps. After his discharge from the military he began working as a car salesman at Atkins Ford in Jasper. Kenny then moved to Jim Trice Honda where he became Manager and co-partner of the dealership in 1981. Kenny not only sold automobiles, on occasion he sold airplanes. He was a licensed pilot, white water enthusiast, and self-taught musician. With his band “Slabhouse”, won Battle of the Bands. In 1987, he moved his family to the Tuscaloosa area where he opened, owned and operated a car dealership. In 1994 he and his family moved to Biloxi, MS for a sales career until he pursued truck driving while continuing to play with various genres of bands. He returned to Tuscaloosa in 1998 where he continued to drive and play music.. Kenny is predeceased by his parents, Samuel Eugene Moore and Evelyn Faye Moore. He is survived by his wife, Della E. Moore; son, Kenneth E. Moore, II; daughter Jennifer A. Moore Gillis; brothers Pete and Ron Moore; sisters, Annie Moore Eash, Barbara Moore Archer and Susie Moore; grandchildren, Devin, Aiden and Emma Moore, Skye, Solomon, Inara and Oliver Gillis as well as a host of extended family and many friends. Services will be held at New Horizon Memorial Funeral Home, Sunday, September 8, 2019. Visitation from 12:00-2:00 pm with the funeral service beginning at 2:00 pm. Burial will follow in New Horizon Memorial Gardens in Dora, AL. Online condolences can be made at www.Newhorizonmemorial.com .New Horizon Funeral Home directing.

Kenneth &#8220;Kenny&#8221; Earl Moore, Sr. passed away September 3, 2019. He was born and raised in Elkhart, IN where he graduated from Jimtown High School. Upon graduation he moved to Alabama where he worked for ACIPCO between his service... View Obituary & Service Information

The family of Kenneth "Kenny" Earl Moore Sr. created this Life Tributes page to make it easy to share your memories.

Send flowers to the Moore family.