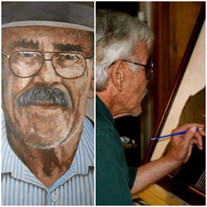 Plainview was home to Joe Garnett from the time he was born in 1939 till he left for college in 1957. All his formative years were spent in a small house in an older, run-down neighborhood with unpaved streets. He came from a family and a time... View Obituary & Service Information

The family of Joe Edd Garnett created this Life Tributes page to make it easy to share your memories.

Plainview was home to Joe Garnett from the time he was born in...

Send flowers to the Garnett family.