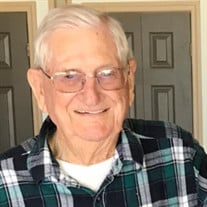 James &#8220;Dick&#8221; Floyd Ballenger was born October 10, 1930 to James Pious Ballenger and Ludie Mae Dean Ballenger. He is the fifth of nine children. He is preceded in death by his parents, and siblings: Freeman Ballenger, Joy Mae Phillips,... View Obituary & Service Information

The family of James "Dick" Floyd Ballenger created this Life Tributes page to make it easy to share your memories.

Send flowers to the Ballenger family.