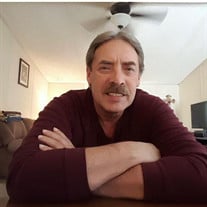 Charles Edward Snider, Jr., 61 of Dora, passed away June 8, 2022. Charles “Chuck” Edward Snider Jr passed away June 8th, 2022. He was born to Charles Edward Snider and Janice Jeanette Stafford Snider January 6, 1961. He is survived by His children Amber Williams (Dane) , David Snider (Mallory) , Alyssa Snider , Christopher Snider (Chey), Nathaniel Gomez (Marsi), and his grandkids Ava Snider, Carson Snider, Axel Williams and Aria Williams, Alyssa's 2 children, Chris' daughter, and Nathaniel's 3 children. He is preceded in death by his mother Janice Janette Stafford May, Father Charles Edward Snider, Step-father James Clifton May, and Step-mother Ann Snider. Chuck was a 1979 graduate of West Jefferson High School where he lettered in several varsity sports. He served in the United States Navy where he received an honorable discharge in 1981. After his time in the Navy, Chuck served as Police Officer in Jacksonville, Florida and spent the last 38 years as a truck driver and other roles in the trucking industry. If you knew him you likely heard him talk about his family, especially those pesky grandchildren or Alabama Football. You probably heard many opinions and many funny moments. We as a family thank you for your support and taking the time to honor him. Visitation will be held at New Horizon Memorial in Dora, Alabama Sunday, June 12th at 6pm until 8pm. Chapel service will be Monday, June 13th at 10am. Burial and military honors will follow and begin promptly at 1:15pm at the Alabama National Cemetery, Montevallo, Alabama.

The family of Charles "Chuck" Edward Snider Jr. created this Life Tributes page to make it easy to share your memories.

Send flowers to the Snider family.