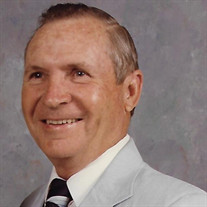 Bobby Eugene Busby, age 86, of Dora, passed away March 15, 2020. He is preceded in death by his wife, Betty Jean McDaniel Busby; parents Norman and Ivy Busby; siblings, William Cicero, Douglas Franklin, Charlie, Bertie, Georgia Mae, Bertha Imogene and Baby Busby who passed away at 2 weeks of age. Bobby is survived by his children Teri Mobley (Charles), Robert Busby (Darlene) and Jodi Russell; grandchildren, Sarah Patterson (Jason), Robin Gant (Chase), Melissa Busby, Ivey Busby, Zachary Russell and Cameron McMurray; 8 great-grandchildren and another due in September as well as a host of extended family and friends. Bobby was a wonderful father. He had a gift and great love for children. He utilized this gift as an educator, coach, mentor but most of all friend. Bobby taught school for 30 years and also coached basketball during that time. He coached baseball for The City of Dora and served as a member of the park board. He owned a children’s entertainment business. Bobby served our Country in the United States Army during the Korean War. He was stationed at Fort Hood in Killen, Texas. He was awarded commendations for Sharpshooter Rifle, Sharpshooter Pistol and a Good Conduct Medal. Bobby attended Faith Baptist Church. Private funeral services will be provided by New Horizon Memorial Funeral Home, Dora. A Celebration of his life will be scheduled at a later date. The family asks that donations be made to Forever and Always Patriots, 325 Hwy 78, Sumiton, AL 35148, (205) 224-7524.

The family of Bobby Eugene Busby created this Life Tributes page to make it easy to share your memories.

Send flowers to the Busby family.