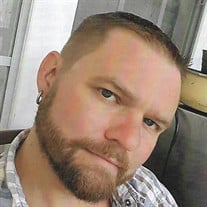 Allen Cole was an extraordinary soul who did everything he could to help others, even when he went without. He regularly delayed his life’s necessities to help others. Allen passed away at the young age of 37 years young on December 10, 2019 from cardiac arrest. Allen attended school at Empire Elementary and Empire Jr. High School then graduated from Dora High School with an Advanced Diploma in 2000. He attended college at Culinard, The Culinary Institute of Virginia College. Allen began his career at Pizza Time in Sumiton, AL after which he worked at various restaurants in the Birmingham, AL area. He was Executive Chef for Compass Group at Regions and AmSouth Bank before working at Dixie Store Fixtures where he sold Commercial Kitchen Equipment and Supplies. His last job was manager of Advance Auto Parts. Allen was raised in Empire, AL by his parents James and Donna Cole. He was influenced greatly by his grandparents, Charles Edward and Mary Cole who lived next door. His aunts, Jan, Sue and Barbara were also there to help guide him into adulthood. They say it takes a village, but he had a good one. Allen learned at a young age that he loved to cook, he entered and won cooking competitions with the local 4H. He then started his working career at Pizza Time in Sumiton, AL, not far from home. He then went on to study at Culinard, The Culinary Institute of Virginia College in Birmingham, AL. Allen continued to work under acclaimed chefs until a car accident took that dream away from him. While Allen could have claimed disability he did not. He went on to work for Dixie Store Fixtures in Birmingham, AL. It was shortly thereafter that Allen met the person who would one day be his spouse. Allen devoted every waking moment to his relationship, which led to marriage. Allen was the best husband anyone could ever ask for. He did anything and everything to ensure that it worked for both. He was truly a gift from God. A Celebration of Life will be held on Sunday December 29, 2019 at 2:00 pm in the New Horizon Memorial Chapel. He was preceded in death by his grandparents, Charles Edward and Mary Frances Cole and Mary Irene and Alvin Lee Russell; his aunts, Nancy Jo Russell and Barbara Ann Cole; his uncles, Jimmy Neil Russell, Richard Reno and Ronnie Syx; and his fur babies, Grayson, Scooter, Vance and Hugo. He is survived by his husband, Steve Wilson and his immediate family; his loving parents, James and Donna Cole; his brother and sister in law, Charles and Kelly Cole; his brother, Michael Cole and Brittany LeVan; his niece, Serenity Higgins; his aunts and uncles, Jan Cole, Sue Cole, Patricia Reno, Carol and Bob Johnson, Brenda Syx, Jerry and Shirley Russell, Gary and Sandy Russell and David and Kathy Russell; all of his cousins and his fur babies, Bruce, Rose, Tabitha, Maxx and Mable.

Allen Cole was an extraordinary soul who did everything he could to help others, even when he went without. He regularly delayed his life&#8217;s necessities to help others. Allen passed away at the young age of 37 years young on December 10,... View Obituary & Service Information

The family of Allen Edward Cole created this Life Tributes page to make it easy to share your memories.

Allen Cole was an extraordinary soul who did everything he could...

Send flowers to the Cole family.